USS Tripoli (LHA 7) is the second ship of the USS America Class.  She is the third ship to bear the name.  It recognizes the significance of the Battle of Derna in both U.S. and U.S. Marine Corps history.  First Lt Presley O’Bannon, who led the Marines into the first battle fought by U.S. troops on foreign soil, was presented a scimitar with a Mameluke hilt by Hamet Karamanli in recognition of his bravery.  The design of this sword became the model for the sword still worn today by U.S. Marine Corps officers. 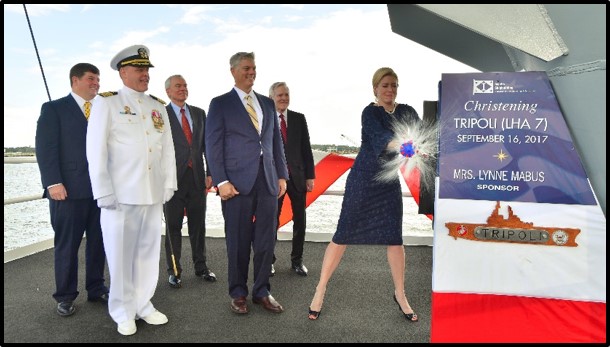 THE CHRISTENING OF THE TRIPOLI

*Click the photo or here to watch the video* 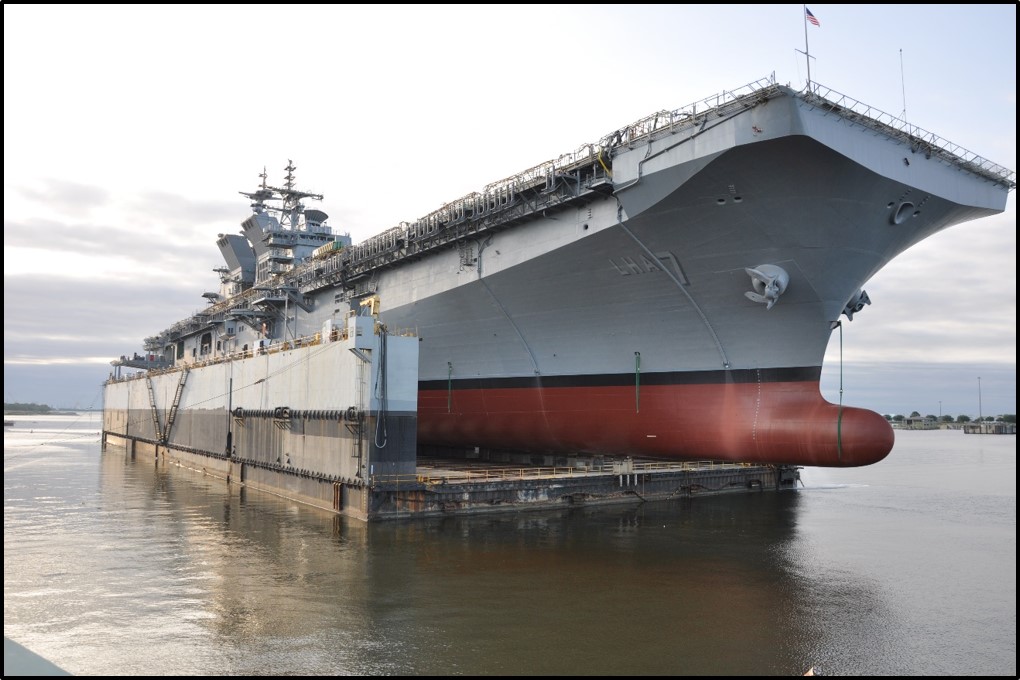 THE LAUNCH OF THE TRIPOLI

*Click the photo or here to watch the video* 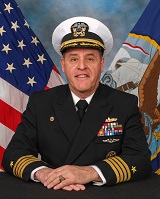 Native of Baltimore, Maryland, Captain Meyers received his commission through the Enlisted Commissioning Program and graduated from the University of South Carolina in 1994. Prior to receiving his commission, he served six years as an Interior Communications Electrician with sea tours aboard USS PHILADELPHIA (SSN 690) and USS MARYLAND (SSBN 738). 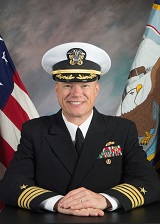 Captain Wells served as the Executive Officer of USS WHIDBEY ISLAND (LSD 41) from 2012-2013 before fleeting-up to Commanding Officer from 2013-2014.  Following command of USS WHIDBEY ISLAND, Captain Wells served as the N3 on the EXPEDITIONARY STRIKE GROUP TWO staff from 2015-2016.  His most recent at sea assignment was commanding USS PONCE (AFSB(1) 15) from 2016-2017 while forward deployed to FIFTH FLEET.

Ashore, Captain Wells attended the Naval Postgraduate School where he received an M.S. in Systems Engineering and Analysis.  Captain Wells also served with the JOINT IED DEFEAT ORGANIZATION as an Operations Research/Systems Analyst and Initiative Evaluations Branch Chief responsible for assessing Counter-IED equipment, tactics, techniques, and procedures.   Most recently, he served as the Director of Inspections (N3) at the Board of Inspection and Survey. Captain Wells has various personal and unit awards including two Legion of Merits, the Defense Meritorious Service Medal, three Meritorious Service Medals, four Navy Commendation Medals and two Navy and Marine Corps Achievement Medals. 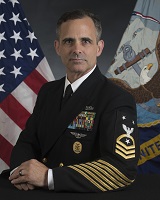 JOIN US AT THE COMMISSIONING